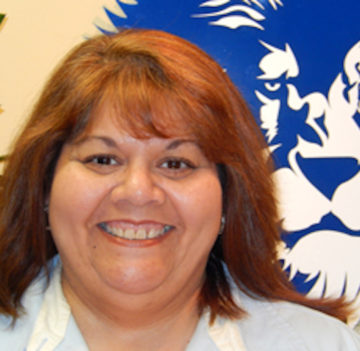 Veronica Arriaga was born in San Antonio, Texas in 1964.  She lived in San Antonio for 27 years, until she moved to Floresville, Texas to raise her children. Veronica is a great example of a caregiver, raising three children from her first marriage and now a blended family of eleven in her second marriage. Her children range in age from 14-30, not including her many grandchildren.  Veronica has only her youngest at home, who keeps her actively involved with all her extracurricular activities, especially with the local H.S. Marching Band.

Working for Oak Hills Family Services as an Outreach Coordinator in 2000, in Floresville Texas, launched a new calling of working and advocating for those who are elderly or disabled adults.  Veronica continued her service to the community  with the San Antonio Food Bank from 2002 -2005 in the Food Stamps and Good Nutrition for Seniors program. As an Outreach Coordinator for the Food Bank, Veronica collaborated with the Health and Human Services Commission, giving her priceless experience in understanding the complicated state and federal policies.

In 2005, Veronica took her experience to the Catholic Charities Archdiocese of San Antonio, where she helped to run Money Management Program 2008. This position allowed Veronica the opportunity to continue to work one-on-one with individuals and directly with Adult Protective Services.

Her work with Adult Protective Services sparked a fire and Veronica has become a passionate community advocate/spokesperson in helping to combat Elder Abuse. While helping individuals with needs, she has worked directly with the Social Security Administration and has gained an immense understanding Social Security Disability policy and procedures.

In June of 2008, Veronica began her tenure with Pride PHC Services as a Community Resource Specialist. Veronica continues her missions with Pride PHC

Services outreaching to those that are the neediest in the community and guiding them into getting benefits that they are eligible for. Her position with Pride PHC Services allows her to continue advocating for Elderly and Disabled adults, through community involvement with the Not Forgotten Coalition 2003 -2006; Long Term Care Council 2002-2012; Elder Abuse Task Force 2006-2012; Wilson County Interagency 2006- Current, Alamo Senior Advisory Council 2008-current; and the Coalition of Advocates for Adult Protective Services (CAAPS) 2009-Current.

Veronica is continually called upon by contemporaries in her field, asking for her advice, direction and assistance in helping individuals in our community with very desperate needs.

Veronica is eager to help and feels truly blessed to have an opportunity to serve her fellow man.