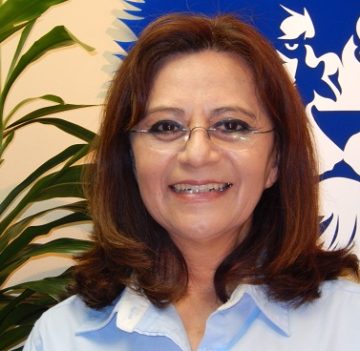 Andrea (Liz) Allen is a co-owner and works administratively as the CLIENT CARE COORDINATION MANAGER and the OFFICE MANAGER.

Originally from Puebla, Puebla MX., Liz came to the United States in 1974, as an Exchange Student.  Liz lived in Livonia, NY and moved to San Antonio, TX  in 1975. Liz is a true testimony to the notion that hard work and dedication can have tremendous dividends.

In 1981, Liz began employment with a San Antonio home health agency as a telephone operator for their payroll department.  She discovered how passionate she felt about the home care industry.  It was at this agency that Liz worked with Mary Medina and Cindy Cruz for the first time.

Being bilingual proved to be a tremendous asset, as Liz was promoted to Payroll Clerk, where her job was to ensure the personal care staff were paid timely and accurately.  Liz quickly learned that these employees were the backbone of the industry and their work ethic made all the difference for the client’s well being.   After 18 months of working in the Payroll Department, Liz was promoted to Service Coordinator, where she was was responsible for locating, interviewing and hiring attendants for the elderly and disabled clients in and around Bexar County.

In 1985, Liz continued her way up the corporate ladder and became the Scheduling Coordinator for the Field Supervior staff who conducted patient visits. One year later, Liz was again promoted to office manager, a position she held for 8 years, until 1995, when she resigned from that organization.

In 1995, Liz, Mary and Cindy came to work together again, starting a PAS program for another individual. In 1999, with all their previous experience in the home health arena, Cindy, Mary and Liz opened Pride PHC Services, Inc. Starting with a simple philosophy, a mission to provide quality services to the community.  They wanted to put the consumers first and their business would naturally grow and prosper.

Liz continues to be passionate about the vision to care for the aged and disabled population putting quality ahead of quantity.  Pride wants to provide an environment where PCA’s have jobs doing what they love and client’s can get the services they need.  Liz states that “Pride not only focuses on the clients, but on the employees as well, because we realize the contributions they make toward the overall success.”